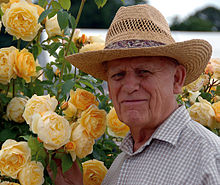 David Charles Henshaw Austin 16 February 1926 – 18 December 2018 was a British rose breeder and writer who lived in Shropshire, England.  His emphasis was on breeding roses with the character and fragrance of old garden roses (such as gallicas, damasks and alba roses) but with the repeat-flowering ability and wide colour range of modern roses such as hybrid teas and floribundas.

Austin’s first commercially available rose, Rosa ‘Constance Spry’, was introduced in 1961. Although these first roses bloomed only once in spring or early summer, they led, in 1969, to a series of remontant (repeat-flowering) varieties.  Austin’s roses soon became the most successful group of new roses in the twentieth century.

Since its founding in 1969, David Austin Roses introduced over 190 roses

From Wikipedia, the free encyclopedia

Constance Spry was the first rose bred by David C.H. Austin to be released, in 1961. Developed at a time when the hybrid tea rose was the most usual style marketed to gardeners, it renewed the popularity of a more old fashioned type of rose. The rose is named after educator and florist Constance Spry.